This installment is mostly from Aidens point of view, and Pandora.
Its very well thought of! Pandora was described briefly in the first book.

Again the story is head on!
We meet Dora who's lived almost all of her life with the sapients, her parents were killed when she was six and ever since she's been with her captures. She has a very dangerous ability, which her captures have been using.
She's saved by Aiden ( and the others off course ) and their connection is instant! Uhh love is in the air! Right from the start Aiden feels this protectiveness toward her, a feeling he's never had before.

Ah and a nice touch to it all is that Aidens sister "maddix or smoke" has finally shown up. The group is trying to find her, so they can recruit her.
In contrary to book no, 1 this one has a little more going on to it. More questions arises as the book progresses.

At first I just thought this to be another love story ( yeah I'm a sucker for that) but yes, we have fierce love BUT these books have some under lying agenda in it!

"Chance" ends with a little spoiler :) "it is the secrets Maddix would never admit that has the potential to change things. Or more accurately, someone."

A.C. heller has a great writing style, and everything comes clearly trough to mind.
A.C. Heller thanks for jet another great book! It was a joy to read, and can't wait to read more from
you!

“Chance knows not of the divine, nor the strands of fate. It is but a ripple in our precarious existence, easily overseen, seldom noticed.” Damiano 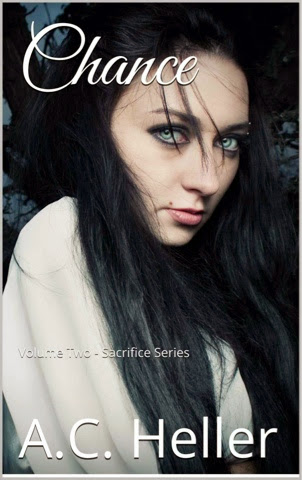