We meet Clementine ( whom I totally love!) a human but not like normal ones, she's been genetically modified and altered, but even more than she herself knew.

She experiences this extra modification one night. She tried to acces some files about her donors ( parents ) but kept getting the same message "acces denied" as things got more frustrating, she recived a message from the program that they knew what she was doing and she was not to know her donors and that she was property of the program. It ended very badly for her room ;)

At the beginning we met her best friend cassie, they'd been inseparable since a very young age. Well she comes into the picture later in the book.

Cleo's outburst in her room didn't go unnoticed and was send to the deans office and was told that she was being transferred to a new school 15 minutes later, go goodbyes or hugs.

At the new school St. Ignatius
the book really took its magic over me! I loved how the characters are so trustworthy and how well developed the characters are.
It's so expertly written and Christine has a huge talent for details!

I enjoyed reading Deviation, it was mesmerisingly good! It's a book you should read, not read about!!
Can't wait to read the next installment of the sophisticates series !

“You may not be able to control your future, but you can control how you handle it. Don’t let the fear rule you, rule the fear.” - Cassie 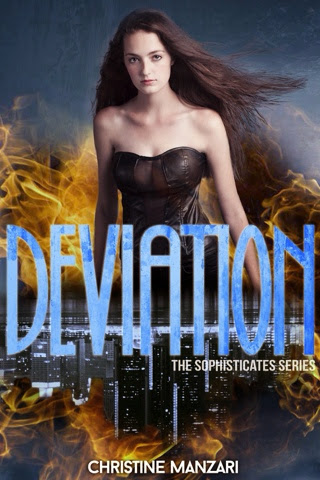